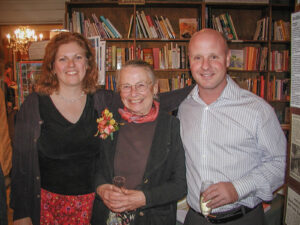 We take time in March to honor the many women who have contributed their art, ideas, courage, scientific breakthroughs, political prowess and business acumen. We include among them our own bookstore founder Marilou Kelly (1933-2014) (Marilou in the center between Manager Heidi Schmidt and current owner David Hunt) who had the vision in 1974 to forge a community bookstore where there was none.

We may wish that such special recognition were not needed, that women had naturally been heard and accepted alongside their brethren rather than eclipsed, subverted, quashed and quieted. But as history stands, we must now excavate and celebrate those who have too long been out of sight. In that spirit we hope you will read and enjoy along with us the progress that has been made…

You may also find something of interest on these lists: